Marketers and designers are using A/B testing more and more to better understand what drives certain visitor actions. Improving your A/B testing methods will give you a better glimpse into user behavior and ultimately help increase your conversion rate.

The call to action and it’s wording, size, color and placement, the headline and product description, product pricing or other offers, images and their placement, and the amount of text are all elements you can test using A/B testing. For more information on how to set up A/B testing, see this article from Smashing Magazine by Paras Chopra.

If leaving out a content area increases conversion, then of course, leave it off. If it doesn’t seem to be effecting your conversion rate, change the content and test again.

On the other hand, if you find excluding it actually decreases your conversion rate, keep it on and then test smaller pieces of the content that make up the content area – like the headline, body, call to action or image.

For example, this A/B test from Vendio had 60% improvement by omitting the sign up form from the landing page. Sign up forms on landing pages are sometimes thought to be a best practice, but as this test shows, best practices don’t always prevail. 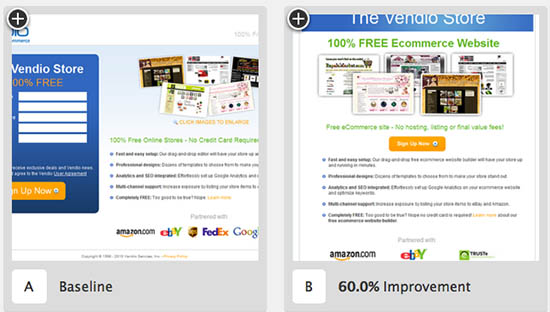 2. Test changes that are already in the works.

If you haven’t had the time or resources to test changes in the planning stage, at least test them when they’re created, but before the changes go live.

Many times, organizations don’t want to devote time to coming up with two versions of copy, images and layout in order to test. But, if you’re like most people and organizations, you’re probably making changes to your website or email campaigns fairly regularly to keep up with the latest trends and technologies.

So don’t worry about testing two new versions against each other and hold up the implementation of something new. Instead, test the old, existing version against the new version before it’s fully implemented. After all, it’s better to know if something will hurt conversions before it’s actually rolled out.

Testing could reveal changes that are negatively effecting conversion goals or they could prove that the changes you’re making are worthwhile with data from your actual customers. You’ll also be able to measure the improvements and better plan for future changes.

3. Don’t replace best practices and your expertise with A/B testing.

You should never become so reliant on testing that you allow the tests to make decisions for you rather than relying on your expertise. You also don’t want to be restrained by having to test every single variable on your website or in your email marketing campaign in order to make a decision.

In this example from Audio Editions, a long form with too many questions and too much text as well as a cluttered side bar of advertisements is tested against a cleaner page with a smaller form, no distracting advertisements and a clear call to action.

In my next tip I’ll discuss why this is WAY too many elements to test, but for now, you can see why the latter version performed better. An A/B test was not needed to prove that a short form and minimal distractions will increase conversions – both are common sense and best practices.

Your goal with A/B testing should be to test variables that both seem good.

4. Test only one element to isolate variables.

A/B testing is designed to only test one change to a design against the control. If you want to test multiple elements, use multivariant testing.

In this example from DIYThemes, the conversion rate increased from 1% to 2%, but there were two things changed. The headline was altered and the social proof text removed. It’s impossible to say which change caused the improvement.

It would have been best to conduct two separate tests for these two elements. Though more time consuming, the data would be more usable.

The key to A/B testing is to keep testing! This isn’t like shampoo – there’s actually a reason to repeat, and it will end up making you money! Create new tests with data from your previous tests and make it your goal to beat the former test’s winning version.

For more examples of successful, unsuccessful and inconclusive A/B tests, check out ABtests.com.

Know of any other great A/B testing strategies? Leave them in the comments!

Back To All Posts?